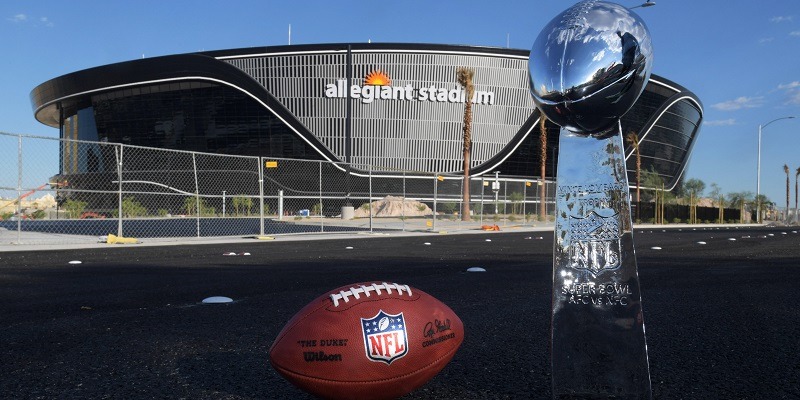 May 29, 2020; Las Vegas, Nevada, USA; General overall aerial view of Wilson 2020 NFL ÒThe DukeÓ official football and Super Bowl Vince Lombardi trophy at the Allegiant Stadium construction site. The stadium will be the home of the Las Vegas Raiders and the UNLV Rebels football teams. It is located on about 62 acres of land west of Mandalay Bay at Russell Road and Hacienda Avenue and between Polaris Avenue and Dean Martin Drive, just west of Interstate 15. Construction of the $1.8 billion stadium began on September 18, 2017 and is expected to be completed on July 31, 2020, in time for the 2020 NFL season and the 2020 NCAA season. Allegiant Stadium will serve as site of the Las Vegas Bowl beginning in 2020, which will feature a Pac-12 football opponent versus either a Big Ten or SEC opponent, as well as the 2020 and 2021 Pac-12 Football Championship Game. Mandatory Credit: Kirby Lee-USA TODAY Sports

Dennis Ackerman from BLEAV In Raiders joins the show to preview Las Vegas’ upcoming 2021 season and Monday night’s opener against the Baltimore Ravens.

Dennis talks about the question marks the Raiders have on both sides of the ball coming into the season as well as some bright spots.

He notes the complete overhaul of the defense, including the addition of coordinator Gus Bradley and the signing of defensive end Yannick Ngakoue to improve the pass rush.

To illustrate how the desire to upgrade the defense, Ackerman notes that recently-signed linebacker KJ Wright and Denzel Perryman are already listed as starters.

“They had one of the worst defenses last year…so they can really go only one way.”

The offensive line has four new starters and some unproven skill guys on the outside, including Henry Ruggs and Bryan Edwards.

He talks about the “love-hate relationship” Derek Carr has with Raider fans and how running back Josh Jacobs can help establish the run.

In this article:featured, Las Vegas Raiders