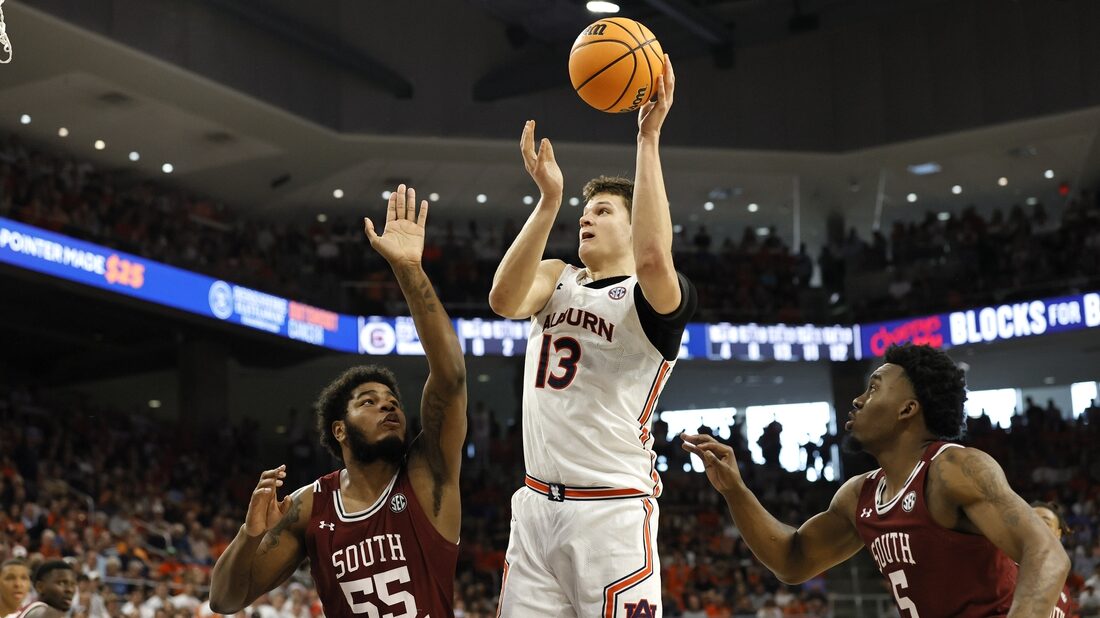 It will be an all-Alabama matchup Friday in Greenville, S.C., when the #2 seed Auburn Tigers take on the #15 seed Jacksonville State Gamecocks in the first round of the NCAA Tournament.

The winner of the Midwest region contest will meet either Southern California or Miami on Sunday.

Auburn (27-5) will be looking to turn the page quickly after a disappointing end to the regular season and a flat performance in the SEC tournament. The Tigers started the season 22-1, but were an inconsistent 5-4 in their final nine games.

They did do just enough to win their first outright SEC regular season championship since 1999, but the #1 seed in the SEC tournament immediately lost in its first game, 67-62, against a Texas A&M squad that did not even make the NCAA Tournament.

If Auburn is going to make a deep run, a lot of it will be on the shoulders of Jabari Smith and Walker Kessler. Smith averages 17.1 points per game to lead the Tigers, and Kessler averages 11.7 points to go with a team-high 8.2 rebounds and 4.5 blocks.

“Defense and rebounding win championships,” Auburn coach Bruce Pearl said. “Our rebounding hasn’t been nearly as good. That’s going to be something we’re going to have to improve on, and then offensive execution. And that includes being able to shoot the basketball and make better decisions with the shot we take.

“Those are the three things I think we need to be able to do in order to start playing our best basketball.”

The journey for Pearl’s team playing its best basketball will start against a Jacksonville State (21-10) team that did not even win its conference tournament. The Gamecocks lost 54-51 to Jacksonville in the Atlantic Sun semifinals but were given a reprieve.

When Bellarmine, which was not eligible to play in the NCAA Tournament, won the Atlantic Sun tournament, the league’s automatic bid went to Jacksonville State as the regular season champions.

“We wanted to schedule some teams that we thought would be NCAA Tournament teams,” Gamecocks coach Ray Harper said. “We opened at Wichita State, we went to VCU, we’ve gone to Alabama. I think all of those experiences combined will help this team. This team has been in some tough environments.”

The two head coaches in this game have a history going back more than three decades. When Pearl was the head coach at Southern Indiana and Harper at Kentucky Wesleyan, the two squared off 17 times with Harper’s teams winning 13 of those battles.

The two schools, separated by just 105 miles, have met six times. Auburn has won all six games, although the schools have not played each other since 2013.