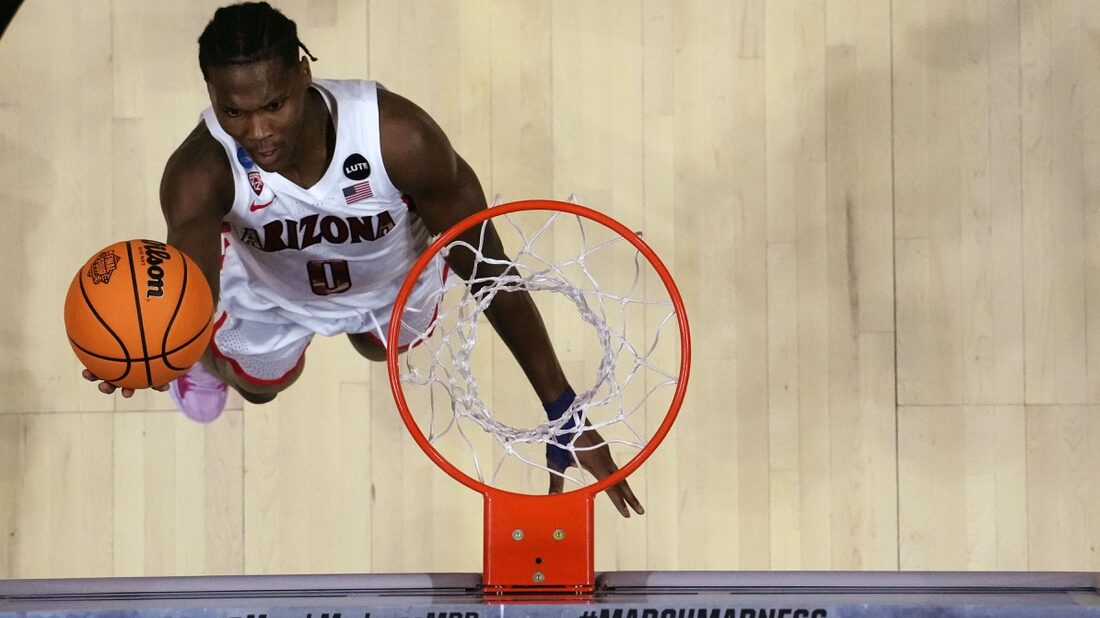 Expect the fur to fly and no quarter given Thursday when deep and dangerous #1 seed Arizona battles rugged fifth-seeded Houston in an NCAA Tournament South Region semifinal in San Antonio.

The storied programs will play for the first time since 2009 and first time ever in the NCAA Tournament.

Arizona is a consensus 1.5-point favorite among major sportsbooks – and a well-supported one.

The Wildcats have been backed by 66 percent of the bets and 67 percent of the spread handle at DraftKings and 63 and 64 percent, respectively, at BetRivers.

The opening line has also held steady at BetMGMm where Houston has drawn only 32 percent of the spread bets and 25 percent of the handle. Arizona has been the most-bet team among the Sweet 16 matchups and has been backed by the third-most money.

The Wildcats (33-3) have performed as expected when they were granted the top seed in the South Region. They rolled to a win over Wright State in their opening game before outslugging gritty ninth-seeded TCU 85-80 in overtime to earn a berth in the Sweet 16.

Bennedict Mathurin scored 30 points, including the 3-pointer to send the game into an extra period, and six more in overtime to lead Arizona. Christian Koloko added 28 points on 12-of-13 shooting from the floor to help the Wildcats win their eighth consecutive game.

“We came all the way from Tucson to San Diego for a reason — we came here to win,” Mathurin said.

Arizona captured both the Pac-12 Conference regular season and tournament titles and have no intention of slowing down in coach Tommy Lloyd’s first season as head coach after 20 years as an assistant at Gonzaga.

“I don’t know if I deserve this, but those players deserve it,” Lloyd said after Sunday’s win. “I’m so thankful that they get to experience this. Going to a Sweet 16 is special.

“We took another step. But we’ve got a daunting, daunting task ahead of us. The grit and toughness and the teams on our side of the bracket — it’s pretty formidable. So, we’re going to have to come back and recover a little bit because it’s going to be a quick turnaround.”

The Cougars (31-5), perhaps still a little peeved about being given just a 5 seed by the NCAA selection committee, look to take their next step to a repeat spot in the Final Four. Houston did almost everything correctly Sunday in a 68-53 win over fourth-seeded Illinois as Taze Moore scored 21, Jamal Shead 18, and Kyler Edwards 15 points.

Cougars coach Kelvin Sampson was so pumped up after the win that he pulled off his shirt during the team’s locker room celebration.

“He’s an emotional coach, you know,” Shead said. “When we win and we’re happy, he shows it sometimes, too. I’m so happy to play for him. It’s a joy to play for him. We love each other so much that when those emotions are high, we got to let ‘em out.”

The Cougars have earned their own brand of swagger, built by a rugged American Athletic Conference campaign in which they won both the regular season and tournament championships despite losing their two best players to season-ending injuries before conference play.

“Our kids are tough kids, and this is a tough program,” Sampson said. “That’s how we’ve achieved to this be point. All of our players buy in, stand on the shoulders of the kids that came before them.

“You know, you go into every game with a plan. Plans mean nothing if the players don’t believe in it and execute it.”

Houston has won five straight games and 11 of its past 12, advancing to the Sweet 16 for the third straight season. Arizona is making its first Sweet 16 appearance in six years.