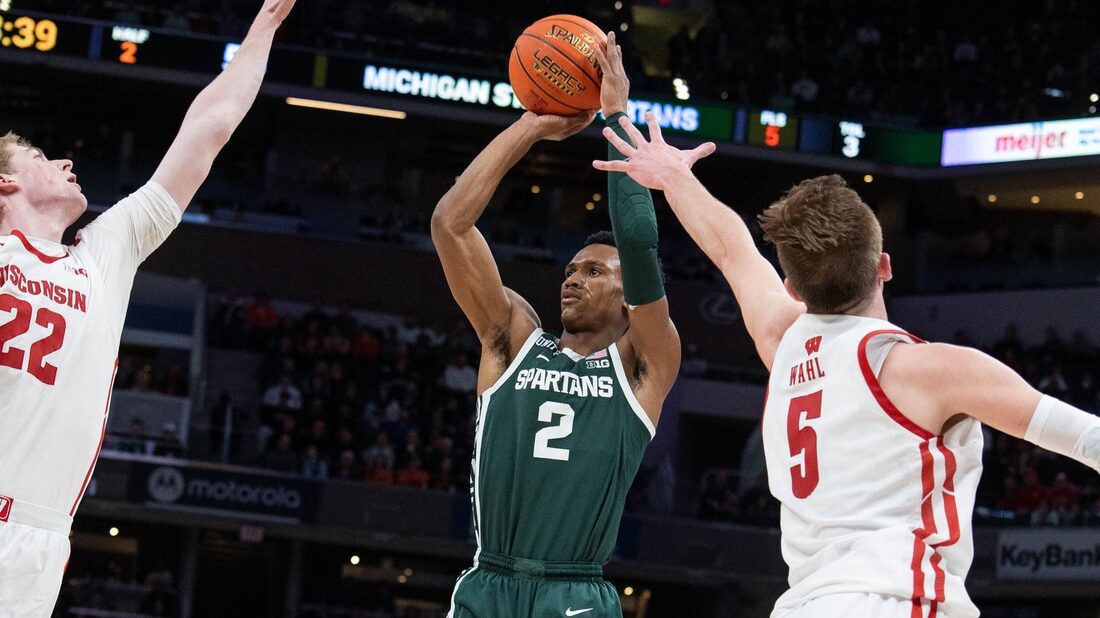 Ninth-ranked Purdue and Michigan State each advanced to their semifinal matchup Saturday in the unpredictable Big Ten tournament by making big plays down the stretch.

Purdue (26-6), the #3 seed, scored the final seven points to hold off 11th-seeded Penn State 69-61 on Friday night, becoming the only seed among the top four to advance after receiving the double bye.

The seventh-seeded Spartans (22-11) reached the semifinals for the ninth time in the last 12 seasons with a 69-63 victory over 12th-ranked and second-seeded Wisconsin.

Top-seeded Illinois and #4 seed Rutgers also lost Friday, setting up the other semifinal between #24 Iowa and Indiana.

Tyson Walker lifted Michigan State past the second-seeded Badgers, scoring nine of his 11 points in the final 1:33 as the Spartans pulled away from a 58-58 tie.

Walker also propelled Michigan State past Purdue 68-65 at home on Feb. 26 with a 3-pointer with three seconds left in their only meeting this season.

“They’re the flagship program of our conference,” Purdue coach Matt Painter said. “So that’s how we’ve always looked at it. If you want to be that team, you want to win our league, or you want to advance in the NCAA Tournament, you’ve got to be able to compete with them. Be able to beat them, and obviously this year we didn’t beat them. They were one possession better than us, and now we get a chance to go back and compete again with them.”

Against Penn State, Purdue led 56-44 with 8:15 remaining before the Nittany Lions rallied within 62-61. Jaden Ivey hit two free throws and then turned a long rebound into a breakaway layup to make it 66-61 with 44 seconds left.

Ivey finished with 17 points and a team-high seven rebounds. Zach Edey, the Boilermakers’ 7-4 sophomore center, added 15 points in 18 minutes as Purdue reached the semifinals for the first time since 2018. The Boilermakers are 3-6 when scoring fewer than 70 points, and 23-0 scoring 70 or more.

Against Wisconsin, Walker hit consecutive jumpers to put the Spartans up 62-58 with just under a minute remaining. After Chucky Hepburn hit a 3-pointer to pull the Badgers within 65-63 with 16 seconds left, Walker closed it out with four consecutive free throws.

The Spartans, who average more than 13 turnovers per game, protected the ball against Wisconsin. In their 76-72 victory over Maryland on Thursday, turnovers in the final 2:26 almost cost them a 20-point lead.

“I consider this a big, big win, because I think if you look at Wisconsin, what is it, they won like 14 games in a row five points or less,” Michigan State coach Tom Izzo said. “They don’t make mistakes. We had seven turnovers and still didn’t win the turnover battle because they had seven.”

Marcus Bingham Jr. had 19 points and 11 rebounds for Michigan State, which had split with Wisconsin during the regular season.

In the first meeting with Purdue, the Spartans led by 11 midway through the second half and then salvaged the win on Walker’s 3-pointer. Michigan State converted 17 turnovers into 16 points and also outscored the Boilermakers 19-2 on fast-break points. Edey had 25 points in 22 minutes in that game.

“We’ve got to play better. We play really good in spurts. We’ve got to be more consistent,” Painter said. “We weren’t very consistent when we played them the first time, and a lot of that had to do with them.”