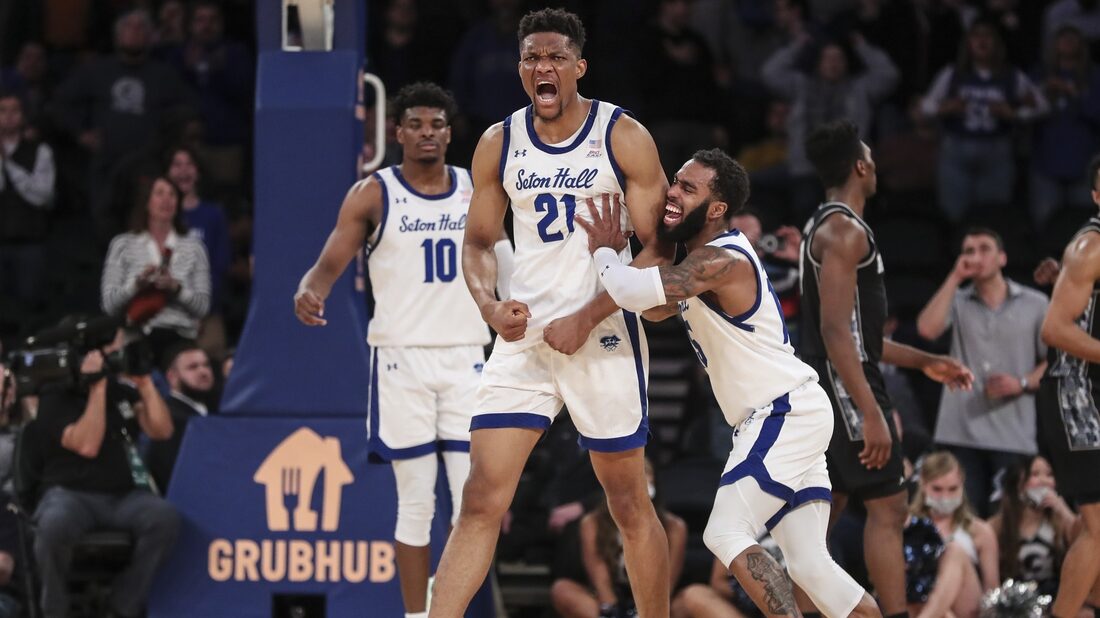 Seton Hall played a taxing first-round game in the Big East tournament that finished past midnight on the East Coast. Now, after a quick turnaround, the sixth-seeded Pirates will be back in action Thursday night against third-seeded UConn in the tournament quarterfinals in New York City.

The Pirates (21-9) staved off an upset bid from Georgetown and won 57-53 in the final first-round game of the night at Madison Square Garden on Wednesday. The Hoyas, in an effort to erase the infamy of their winless Big East campaign, led Seton Hall for much of the game.

But Seton Hall closed on an 11-3 run. Jamir Harris’ deep 3-pointer with 40 seconds to go flipped the score in favor of the Pirates for good.

“Give Pat (Ewing) a lot of credit for the way his teams have played all year. They’ve been so unlucky,” Pirates coach Kevin Willard said postgame on FS1. “What’s great about this (Seton Hall) group is they never get rattled.”

The Hoyas were able to give the Pirates a scare due to their rebounding advantage, something Willard hopes will be corrected against UConn. Georgetown had a plus-14 rebounding margin and controlled the offensive glass 21-9.

“In the first half they kicked our butt on the boards and that was the biggest difference,” the coach said. “Going to play against a very physical UConn team, we’re going to have to rebound the basketball.”

The Huskies (22-8) won six of their past seven games to secure the third seed in the tournament. They are playing their strongest basketball since returning to the Big East before the 2020-21 season, but to take the next step under fourth-year coach Dan Hurley, they will need to find some postseason success. The program last won an NCAA Tournament game in 2016.

The #20 team in the nation, UConn ranked second in the Big East season in scoring offense (76.1 points per game) and scoring defense (65.7). To Hurley, it’s the latter that will help his team unlock its potential down the stretch.

“The games we have failed in, we haven’t played the elite defense it takes to advance in March,” Hurley said. “If we don’t play elite defense, the way this team is built, we won’t advance in either tournament.”

UConn’s Jordan Hawkins missed the regular-season finale with a concussion and doesn’t appear likely to be ready for Thursday’s game. The freshman averages 5.8 points and 2.0 rebounds in 14.7 minutes per game, mostly off the bench.

Tyrese Martin might be playing with something personal to prove. The senior wing is UConn’s third-leading scorer (13.4 ppg) and second-leading rebounder (7.6) while shooting 43.9 percent from 3-point ranger, but he was left off the All-Big East team — a snub in the eyes of his coach and teammates.

“If you don’t like being left off,” Hurley recommended, “go get MVP or go get all-tournament.”

UConn and Seton Hall split their season series, each winning at home. The Pirates took a 90-87 overtime win on Jan. 8 behind a career-high 27 points from Kadary Richmond, who shot 10 of 13 that day.

But Richmond is playing through a sprained thumb and sat most of the second half against Georgetown, so it’s unclear how involved he will be on Thursday.