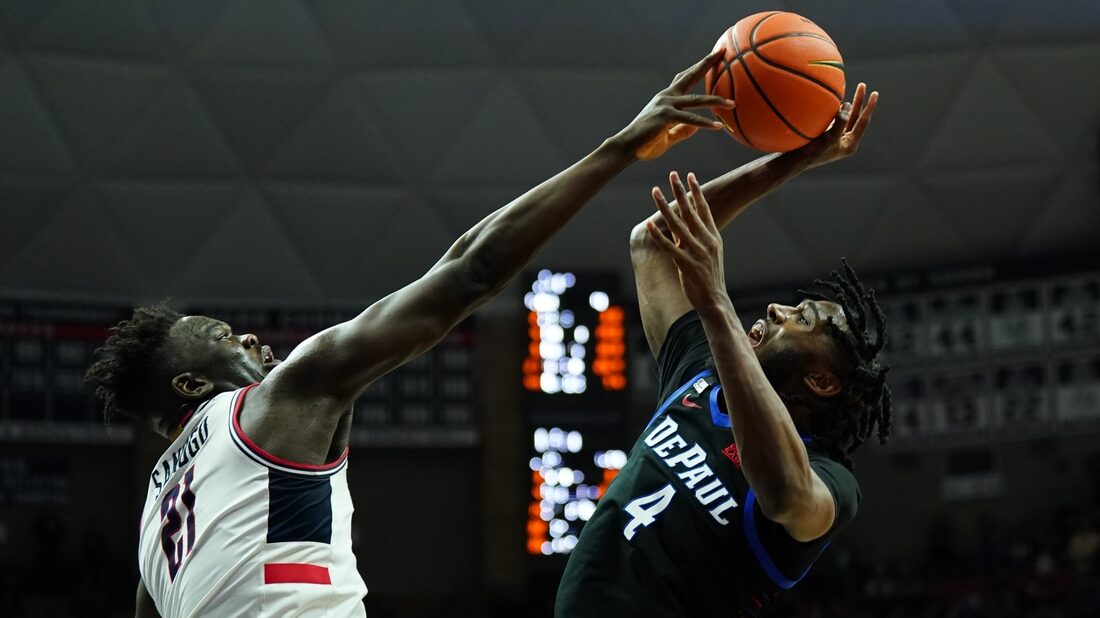 Adama Sanogo got off to a torrid start and finished with 26 points and 11 rebounds Saturday to lead #18 UConn past DePaul 75-68 in Storrs, Conn.

Sanogo finished 10-for-16 from the floor for UConn while Tyrese Martin also notched a double-double with 19 points and a game-high 16 rebounds.

The Huskies (22-8, 13-6 Big East) gained the #3 seed in the Big East tournament by winning for the sixth time in seven games.

DePaul made it interesting late, rallying from an 18-point deficit behind 22 points from Javon Freeman-Liberty. The Blue Demons couldn&rsquor;t convert a late trip that could have trimmed the margin to one possession, knocking the ball out of bounds after a miss by David Jones.

The Huskies had ample production while regaining their footing following a loss earlier in the week at Creighton. UConn enjoyed a 48-24 scoring advantage in the paint behind Sanogo and Martin, and forged a 49-31 advantage on the glass.

The foul line proved problematic for DePaul, which missed eight of 14 free throws in the seven-point defeat. The Blue Demons had their three-game winning streak snapped while bidding for its first four-game streak since joining the Big East.

The Blue Demons remain an NIT hopeful, which would mark a positive start for first-year coach Tony Stubblefield.

Sanogo scored 10 of the Huskies&rsquor; first 12 points and had 20 first-half points on 9-for-11 shooting as UConn broke loose for a 40-29 halftime lead.

They limited DePaul to 35.3% first-half shooting, although the Blue Demons got rolling in the second half, they never got closer than five points.

In this article:cbb-uconn, depaul, ncaab, uconn