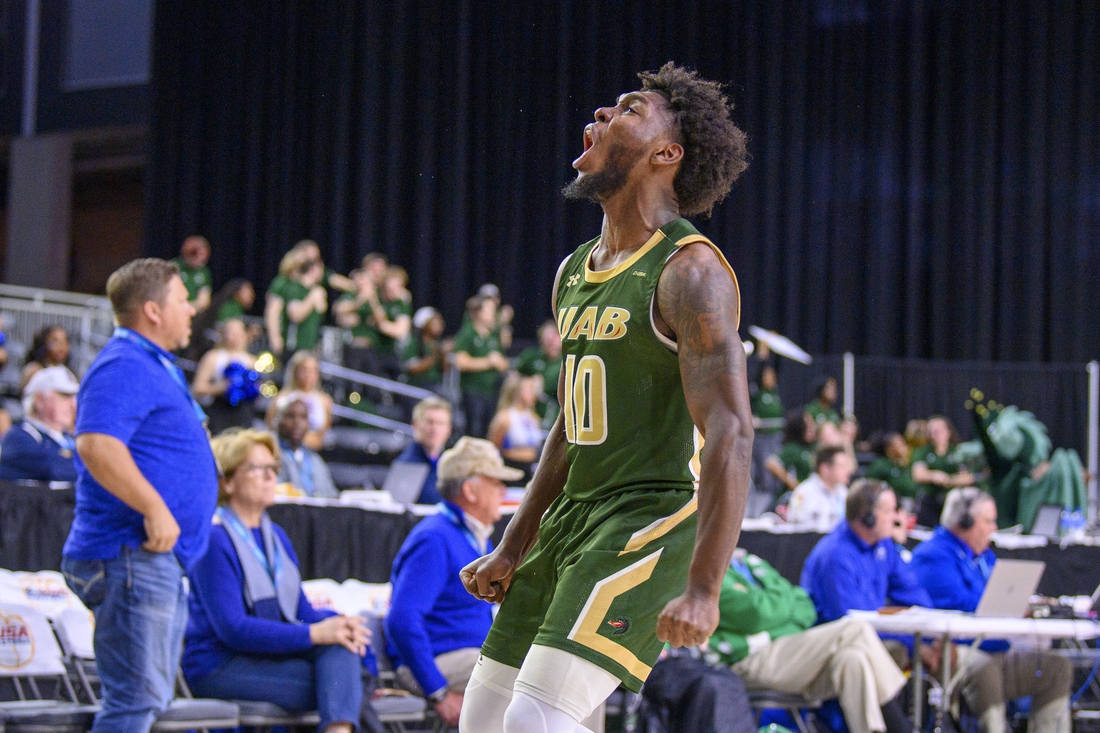 Houston enters the NCAA Tournament as a #5 seed after sweeping the American Athletic Conference regular season and tournament titles for the first time.

The Cougars (29-5) begin their attempt to make it back to the Final Four for the first time since 1984 when they take on 12th-seeded UAB (27-7) on Friday at Pittsburgh.

UAB has been among the most popular double-digit seeds at BetRivers, drawing 67 percent of the money and 53 percent of the spread bets as an 8.5-point underdog.

The line has also moved to 8.5 after opening at 7.5 at BetMGM, where the Blazers have been backed by 64 percent of the spread bets and 58 percent of the money.

The Blazers won the Conference USA tournament title for the first time since 2015.

Houston swept its conference regular-season and tournament titles for the first time since 1992 when it was in the Southwest Conference. The Cougars have won at least one game in their past three NCAA Tournament appearances and enter having won nine of their past 10 games.

Houston is allowing the fourth-fewest points per game in the nation (58.9) and second-fewest among NCAA Tournament teams behind only San Diego State.

Fabian White Jr. has been the catalyst on offense especially following early-season injuries to guards Marcus Sasser and Tramon Mark.

“When people go down it’s an opportunity,” Houston coach Kelvin Sampson said. “What people saw as long faces, blank stares and woe is me, we saw it as an opportunity. I said we can still win. I don’t think we missed a beat. We just kept going.”

White has averaged 13.2 points per game and while shooting 50.7 percent from the field, including 39.8 percent from 3-point range.

Sasser, who has been sidelined since December with a broken foot, might return for the Cougars at some point in the NCAA Tournament. He was Houston’s leading scorer at 17.7 points per game and averaged 2.2 steals in 31.9 minutes per contest.

“I’ve just got a couple of more X-rays I’ve got to do and I’ll see from there,” Sasser said, according to PaperCity magazine this week.

UAB enters the NCAA Tournament for the first time since 2015 thanks to a smothering defense. The Blazers finished the season averaging 9.6 steals per game, but also have some scoring punch to complement their defensive prowess.

Conference USA Player of the Year Jordan Walker averaged a team-high 20.4 points and 4.8 assists per game. He averaged 31 points in the conference tournament and has been crucial to the Blazers during their current seven-game winning streak.

“We’ve got an MVP,” UAB coach Andy Kennedy said after his team beat Louisiana Tech 82-73 in the C-USA final. “We’ve got a conference tournament trophy. And we’re getting an opportunity to play in the NCAA Tournament.”

Ole Miss transfer K.J. Buffen has averaged 10.0 points and 6.7 rebounds per game for UAB, which earned its highest seeding since its appearance at the end of the 2010-11 season.

Kennedy has gone 49-14 during his first two seasons as coach.

“This is the Gene Bartow standard,” Kennedy said, referring to the former Blazers coach, who he played for at UAB. “It’s when guys have pieces of a net in their hats.”