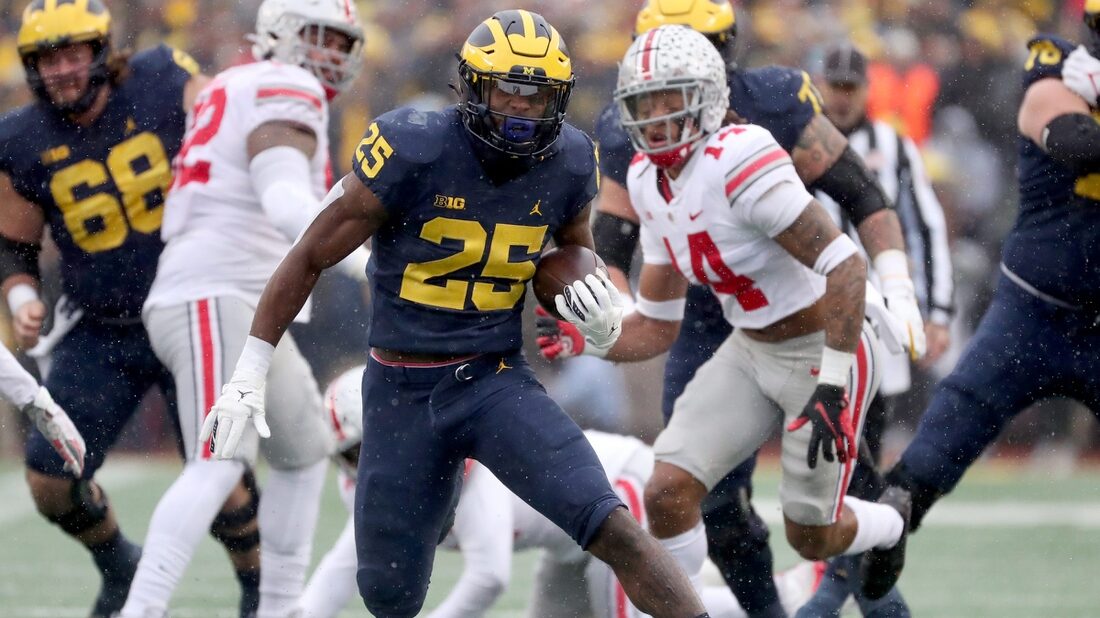 Hassan Haskins tied a school record with five rushing touchdowns, four in the second half, as #5 Michigan ended a decade of futility against Ohio State with a 42-27 victory Saturday against the #2 Buckeyes at Ann Arbor, Mich.

The Wolverines (11-1, 8-1 Big Ten) will play in the Big Ten Championship Game for the first time on Dec. 4 at Indianapolis against Iowa, which benefitted from Minnesota’s 23-13 win Saturday evening over #14 Wisconsin.

Haskins scored from the 13 and the 1 in the third quarter for a 28-13 lead as the Wolverines took over while ending an eight-game losing streak to the Buckeyes (10-2, 8-1). It was Michigan’s first victory in the series since 2011. The rivals did not face each other in 2020 because of an altered schedule due to the COVID-19 pandemic.

Haskins had 28 carries for 169 yards and Blake Corum ran for 87 yards on six carries. Michigan quarterback Cade McNamara was 13 of 19 for 159 yards and an interception.

Stetson Bennett threw for 255 yards and four touchdowns as the top-ranked Bulldogs capped their first 12-0 regular season in school history with a victory over the host Yellow Jackets in a nonconference game in Atlanta.

Bennett, who was replaced by JT Daniels early in the fourth quarter, went 14-for-20 passing and completed passes to 10 different receivers.

Brock Bowers led the way with 100 yards and two touchdowns on three catches, while Ladd McConkey and Jermaine Burton each caught a touchdown pass. Kenny McIntosh rushed for 66 yards and a touchdown on two carries to power a ground game that amassed 208 yards on 31 carries, an average of 6.7 yards an attempt against Tech (3-9).

John Metchie caught the game-winning 2-point conversion pass from Bryce Young in the fourth overtime to lift the Crimson Tide past the Tigers, after Alabama overcame a 10-0 fourth-quarter deficit.

Young completed 25 of 51 passes for 317 yards and two touchdowns with an interception for the Crimson Tide (11-1, 7-1 Southeastern Conference) as they won one of the most memorable Iron Bowls in the rivalry’s 86-game history.

Metchie finished with 13 catches for 150 yards, plus both 2-point catches when rules dictated the teams go for 2 after the second overtime.

TJ Finley hit 17 of 26 passes for 137 yards with a pair of scores and an interception for the Tigers (6-6, 3-5), who led all the way to the final minute of regulation but couldn’t finish off what would have been one of the biggest upsets in rivalry history. Finley’s 2-point pass in the fourth overtime fell incomplete.

The Fighting Irish did their part to remain in the College Football Playoff discussion as Jack Coan threw for 345 yards and two touchdowns to lead them past the host Cardinal in the regular-season finale for both teams.

Notre Dame’s seventh straight win, all against unranked opponents, put the Fighting Irish (11-1) in position to possibly move up in the penultimate rankings that will be released Tuesday.

Notre Dame wasted no time seizing the upper hand against Stanford (3-9), driving 74 yards in five plays for a touchdown just 5:21 into the game. Coan connected with Braden Lenzy from 16 yards out for the score.

Spencer Sanders threw for 214 yards and a touchdown and ran for 93 yards and another score to lift the Cowboys over the rival Sooners in Stillwater, Okla.

The Cowboys’ defense struggled through much of the first half but came up big after halftime — even after the offense and special teams put them in a tough spot. Oklahoma State allowed just 180 yards of offense after the break — only 48 through the air.

Blake Shapen passed for 254 yards and two touchdowns, while Abram Smith added 117 yards rushing and a score as the Bears outlasted the visiting Red Raiders in the Big 12 Conference regular-season finale for both teams at Waco, Texas.

Texas Tech’s Jonathan Garibay was wide left from 53 yards on a field-goal attempt on the final play of the game that would have forced overtime.

Shapen, starting for the first time in place of the injured Gerry Bohanon, made plays late as Texas Tech responded to every time Baylor tried to put away the game. Trestan Ebner caught four passes for 118 yards and a touchdown for the Bears (10-2, 7-2 in Big 12).

Anthony Brown passed for 275 yards and two touchdowns, and rushed for another score, and the Ducks bounced back to defeat their in-state rival Beavers and advance to the Pac-12 championship game for the third straight season.

Brown finished 23-for-28 passing and rushed for 83 yards.

Travis Dye added 138 all-purpose yards, 99 on the ground, and the second of his two touchdowns that came with 3:14 to play sealed Oregon’s win. The Ducks (10-2, 7-2 Pac-12) clinched the Pac-12 North Division title, scoring on all four drives in the first half to set the tone for a victorious afternoon at home in Eugene, Ore.

Payton Thorne passed for two touchdowns and rushed for another as the Spartans defeated the visiting Nittany Lions at snowy East Lansing, Mich.

Sean Clifford threw three touchdown passes, including two to Jahan Dotson, for the Nittany Lions (7-5, 4-5). Daequan Hardy had a 27-yard interception return for a touchdown for Penn State, which lost five of its last seven regular season games.

Tyler Allgeier rushed for 111 yards and scored two touchdowns, and the Cougars made a fourth-down stop at their own 10-yard line with 38 seconds remaining to hold off the Trojans in Los Angeles.

The Cougars (10-2) built a 28-13 early in the second half of their regular-season finale. Allgeier posted 9- and 5-yard touchdown runs in the second quarter, and Jaren Hall threw the second of his two touchdown passes early in the third quarter to put BYU ahead by the 15 points. Hall’s arcing, 41-yard pass to Keanu Hill threaded through two USC defenders.

Having dropped four home games by double-digit margins this season, including a 62-33 defeat last week to rival UCLA, the Trojans (4-7) appeared headed for another lopsided home loss after the Hall-to-Hill touchdown. But the Trojans rallied for 18 consecutive points in the third and fourth quarters.

Tanner Morgan directed a pair of second-half touchdown drives and the Golden Gophers’ defense held strong for the upset, denying the visiting Badgers a berth in the Big Ten championship game.

Wisconsin (8-4, 6-3 Big Ten), which had won seven straight games to climb to #14 in the College Football Playoff poll, would have won the Big Ten West with a victory.

Morgan capped a 74-yard drive with a 27-yard touchdown pass to Chris Autman-Bell to put the Gophers up 20-13 with 1:56 left in the third quarter. Morgan kept the drive alive with a 27-yard completion to Dylan Wright on third-and-10 to the Badgers 35. Morgan completed 11 of 16 passes for 199 yards with one touchdown and one interception.

Max Johnson threw his third touchdown pass with 20 seconds left in the game as the Tigers upset the Aggies in an SEC game in Baton Rouge, La.

Johnson completed 22 of 38 passes for 306 yards, including the 28-yard game-winner to Jaray Jenkins, who finished with eight catches for 169 yards and two touchdowns LSU (6-6, 3-5 SEC ) reached bowl eligibility.

Kenny Pickett and Jordan Addison wrapped up their outstanding regular seasons in style, connecting for two more touchdowns to lead the Panthers to a road win over the Orange.

Pickett went 28 of 38 for 209 yards with four touchdowns and an interception, giving the senior signal-caller 40 TDs against seven picks this season. Addison racked up 11 catches for 81 yards and two scores in this one, bringing the sophomore standout to 85 catches for 1,353 yards and 17 touchdowns on the year.

Rodney Hammond Jr. and Gavin Bartholomew also had TD grabs for Pitt (10-2, 7-1 Atlantic Coast Conference), which reached double-digit regular-season wins for the first time since 1981. The Panthers will play Wake Forest in the ACC title game next weekend. Syracuse (5-7, 2-6) needed a win to reach a bowl game.

Sam Hartman passed for 236 yards and totaled four touchdowns as the Demon Deacons routed the Eagles in Chestnut Hill, Mass., to clinch a berth in the Atlantic Coast Conference championship game.

Hartman finished 20 of 32 with three passing TDs while rushing for 51 yards and another score on 11 carries. Wake Forest (10-2, 7-1 ACC) won 10 games in the regular season for the second time in program history. The Demon Deacons will face Pittsburgh (9-2, 6-1) in their first ACC title game appearance since 2006, the second year of the game’s existence.

Ikaika Ragsdale ran for a career-high 146 yards and two touchdowns as the Mean Green rolled past the previously undefeated Roadrunners in the Conference USA regular-season finale for both teams in Denton, Texas.

North Texas (6-6, 5-3 C-USA) also got 108 yards and three rushing TDs from DeAndre Torrey in earning its fifth straight victory and becoming bowl eligible. The Mean Green rushed for 340 yards in the game and forced three UTSA first-half turnovers in building an 18-point lead at halftime.

UTSA (11-1, 7-1) had its 11-game win streak snapped but will still host the Conference USA Championship game against Western Kentucky on Friday in the Alamo City. The Roadrunners were stymied in the second half by the loss of quarterback Frank Harris to injury. Harris had 156 total yards (97 of them rushing) to lead UTSA, which had just 212 total yards of offense until the fourth quarter.

Will Shipley rushed for 128 yards and a touchdown and the Tigers’ defense put the clamps on their in-state rival Gamecocks with a shutout in Columbia, S.C.

Clemson (9-3) notched its fifth straight victory and seventh in its last eight games. The Tigers positioned themselves for an 11th consecutive season with 10 or more victories.

Clayton Tune threw a season-high-tying four touchdown passes to lift the Cougars to a victory over the Huskies in a nonconference game in East Hartford, Conn.

Tune completed 21 of 30 passes for 301 yards for the Cougars (11-1), who carry an 11-game winning streak into next Saturday’s American Athletic Conference title game against Cincinnati.

Nathaniel Dell reeled in two scores for his third multi-touchdown performance of the season. He had six catches for 62 yards before exiting with an undisclosed injury.