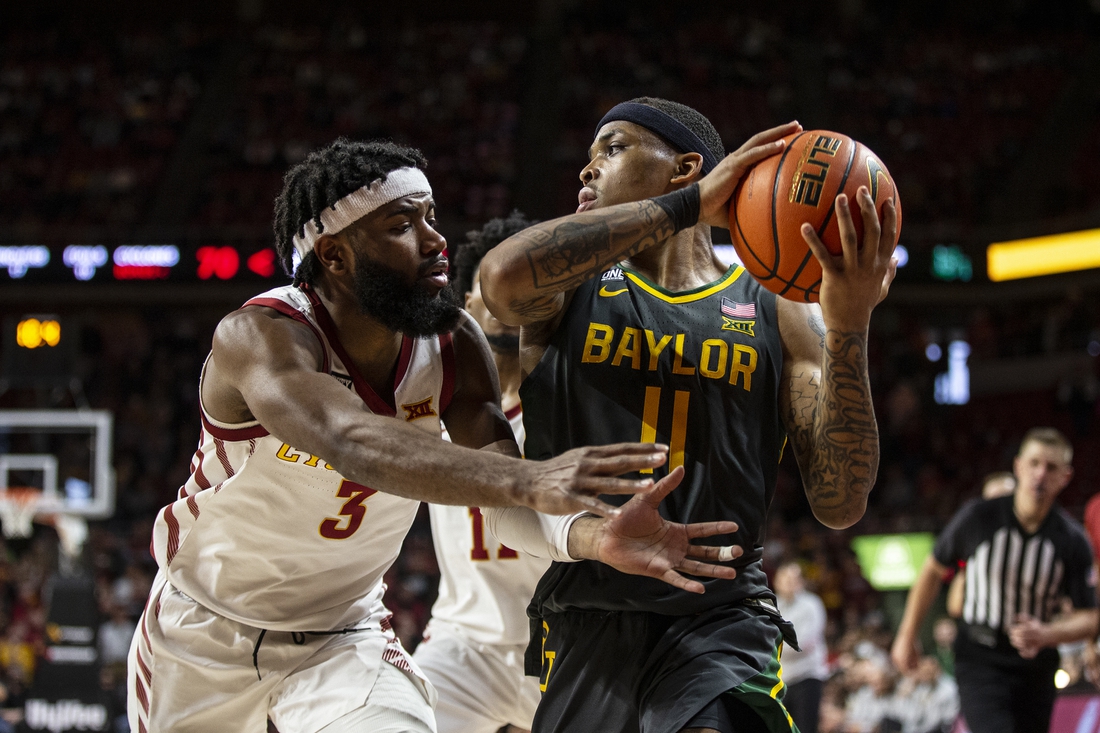 LJ Cryer had 13 points for the Bears and Jeremy Sochan finished with 12 points and a team-high seven rebounds. Baylor (13-0, 1-0 Big 12) won its 19th straight game dating to last season.

The Cyclones’ Tristan Enaruna tallied 23 points on 8-of-11 shooting to lead all scorers. Izaiah Brockington had 18 points and Tyrese Hunter scored 12 for Iowa State (12-1, 0-1).

Jalen Coleman-Lands scored 20 points and Mitch Lightfoot added 14 to lead a 38-3 advantage in bench points as the Jayhawks toppled the Patriots at Lawrence, Kan.

Coleman-Lands, who played previously at Illinois, DePaul and Iowa State, enjoyed his top scoring performance for the Jayhawks (11-1), going 7 of 9 from the floor. Lightfoot equaled his career-high, making all seven of his shots.

Lightfoot also gave Kansas a sturdy defender inside to hold the Patriots’ top scorer, Josh Oduro, to 12 points, five below his average. Davonte Gaines posted a double-double with 15 points and 12 rebounds to pace the Patriots (7-6).

Collin Gillespie scored 21 points as the Wildcats nipped the Pirates in a Big East Conference matchup at Newark, N.J.

Brandon Slater chipped in 17 points and Jermaine Samuels had 11 points and 11 rebounds for the visiting Wildcats (9-4, 2-1 Big East), who did not shoot particularly well from the field (42 percent) or the 3-point line (6 of 20). Villanova also committed 17 turnovers.

Seton Hall (9-3, 0-2) was paced by Bryce Aiken (22 points) and Jared Rhoden (13 points). Jamir Harris had 12 points for the Pirates, while Alexis Yetna pitched in 10 points and eight rebounds before fouling out.

Marcus Carr scored a season-high 20 points to lead a balanced attack as the Longhorns swamped the visiting Mountaineers in Austin, Texas.

Texas was up by 19 at intermission, by as many as 28 seven minutes into the second half and easily held on to beat the Mountaineers. Courtney Ramey hit for a season-best 15 points and Andrew Jones added 14 for Texas, which has won five straight games.

Aljami Durham scored 17 points and Justin Minaya registered a double-double of 12 points and 11 rebounds as the visiting Friars rolled to their eighth straight win with a rout of the Blue Demons in Chicago.