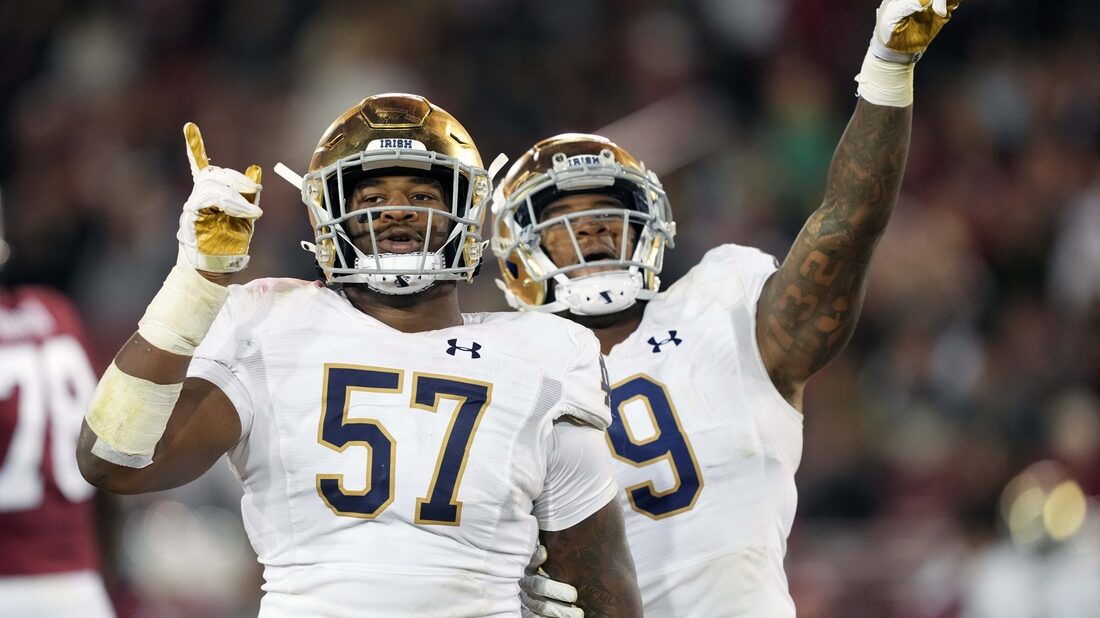 Notre Dame did its part to remain in the College Football Playoff discussion Saturday night as Jack Coan threw for 345 yards and two touchdowns to lead the sixth-ranked Fighting Irish past host Stanford 45-14 in the regular-season finale for both teams.

Notre Dame’s seventh straight win, all against unranked opponents, put the Fighting Irish (11-1) in position to possibly move up in the penultimate rankings that will be released Tuesday. One of the five teams ahead of Notre Dame in the current rankings — #2 Ohio State — was beaten by fifth-ranked Michigan on Saturday.

The Fighting Irish’s only loss came at home against fourth-ranked Cincinnati in October.

Notre Dame wasted no time seizing the upper hand against Stanford (3-9, 2-7 Pac-12), driving 74 yards in five plays for a touchdown just 5:21 into the game. Coan connected with Braden Lenzy from 16 yards out for the score.

The Fighting Irish made it a rout before halftime, with Coan throwing 2 yards to George Takacs for a score and Kyren Williams running 1 yard for another, bookending a 36-yard field goal by Jonathan Doerer.

Down 24-0 at the half and seeking to end a six-game losing streak, Stanford got on the scoreboard on a 5-yard run by Austin Jones in the second minute of the third period. Jonathan McGill’s interception and 23-yard return to the Notre Dame 13 set up the score.

Two plays after Stanford’s score, however, Coan found Kevin Austin Jr. for a 61-yard completion to the Stanford 2, setting up the quarterback’s own 1-yard plunge for a 31-7 lead.

Stanford’s other TD came on a 49-yard Tanner McKee hook-up with Benjamin Yurosek with 11:44 to play. The score came in between two Notre Dame rushing scores, one from Tyler Buchner from 33 yards and the other by Williams from 12 yards with 58 seconds left.

Coan’s 300-yard game was his second of the season. He threw for a season-best 366 yards and four TDs in the season opener at Florida State.

Austin was the game’s leading receiver with six catches for 125 yards, while Michael Mayer hauled in nine balls for 105 for the Irish.

Williams finished with a game-high 74 rushing yards on 19 carries and Buchner added 56 on three carries — each player outgaining the Cardinal (55 yards on 22 carries) single-handedly.

McKee went 20-for-25 for 172 yards and the one score. He did not throw an interception.

Yurosek totaled 87 yards on five catches for Stanford, which was outgained 509-227.

In this article:featured, ncaaf, Notre Dame