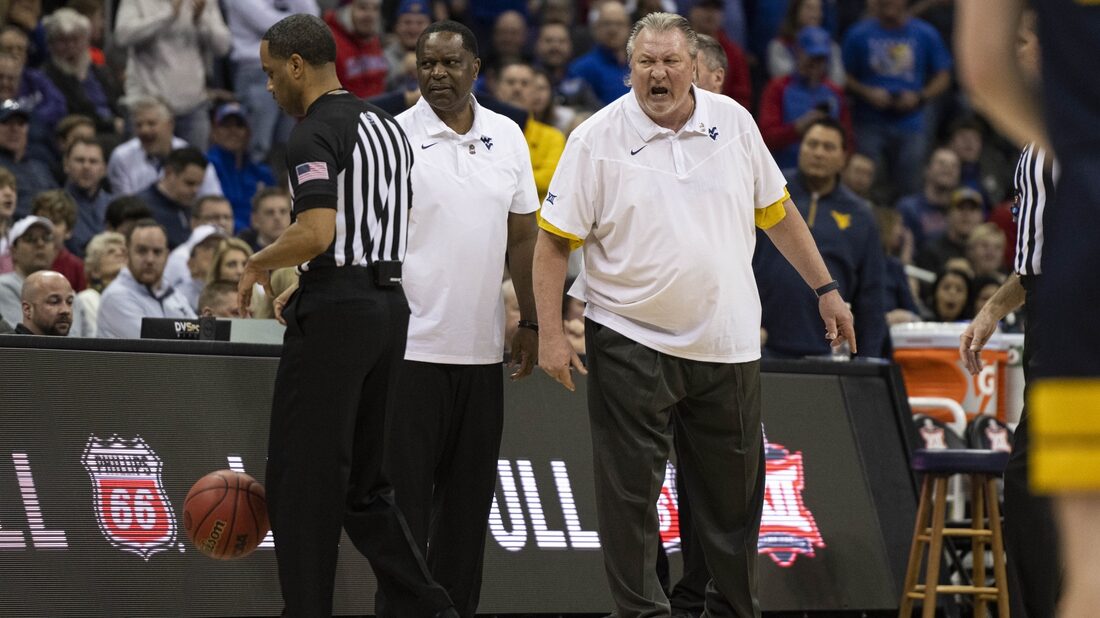 Ochai Agbaji received his Big 12 player of the year trophy before tipoff Thursday and then scored 18 points as #6 Kansas trampled West Virginia 87-63 in the quarterfinals of the conference tournament at Kansas City, Mo.

Frustration nipped the Mountaineers early. West Virginia coach Bob Huggins drew an ejection at the 9:58 mark after complaining about a technical foul assessed to one of his players, Taz Sherman.

All three technicals got whistled by the same official, Doug Sirmons. Sherman protested a no-call following a drive into the lane.

Six free throws were awarded to Kansas off those technicals and Jalen Wilson made five. Wilson tallied 15 points.

The Jayhawks move on to the semifinal round Friday to face TCU, a 65-60 comeback winner Thursday over Texas.

Christian Braun recorded his second straight double-double with 11 points and 14 rebounds as Kansas dominated the glass, 48-27. Mitch Lightfoot came off the bench to add 10 points on 5-for-6 shooting.

West Virginia scored the first seven points of the second half but could not draw closer than 14. Malik Curry led the Mountaineers with 19 points.

Agbaji netted 11 first-half points and Wilson added 10 as Kansas sailed to 41-19 cushion at the break on 48.4% shooting.

Curry scored eight first-half points to lead the Mountaineers, though none of their players made more than one field goal. They started the game 1-for-20.

The finish for Huggins marked just the fourth time in 37 Division I seasons he has posted a sub-.500 record. West Virginia had reached the finals in three of the previous five Big 12 tournaments.

The outcome marked the third double-digit win for Kansas in as many matchups this season against West Virginia, including 85-59 and 71-58 victories in a sweep of conference games.