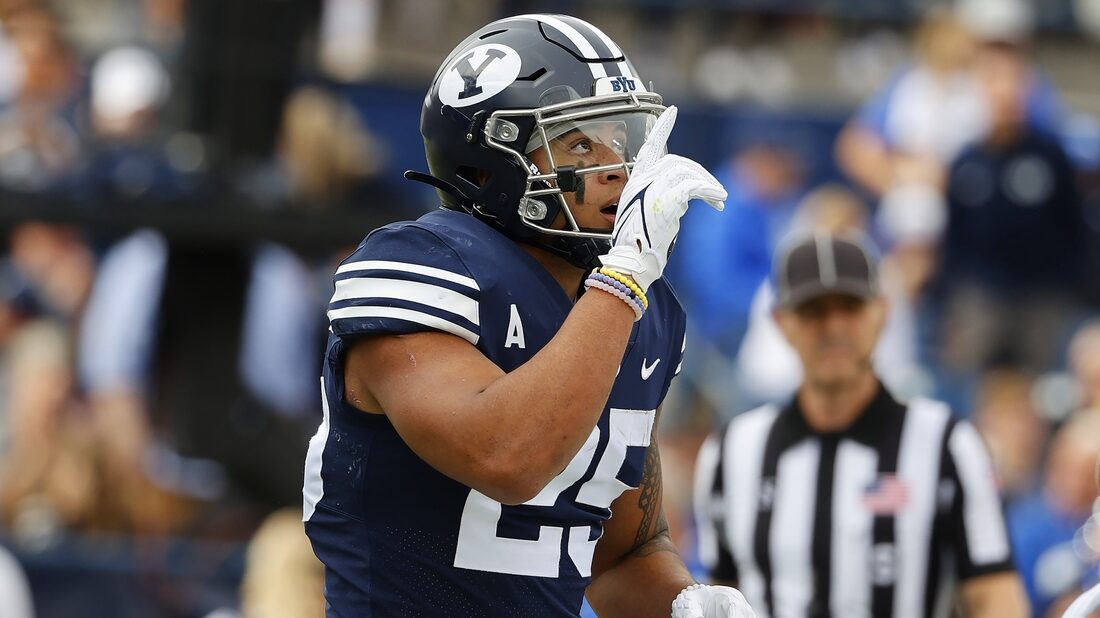 Tyler Allgeier rushed for 111 yards and scored two touchdowns, and #13-ranked BYU made a fourth-down stop at its own 10-yard line with 38 seconds remaining to hold off USC, 35-31, Saturday in Los Angeles.

Having dropped four home games by double-digit margins this season, including a 62-33 defeat last week to rival UCLA, the Trojans (4-7) appeared headed for another lopsided home loss after the Hall-to-Hill touchdown.

But the Trojans rallied for 18 consecutive points in the third and fourth quarters.

Vavae Malepeai, who rushed for 99 yards, started the rally with a 2-yard scoring run midway through the third. Parker Lewis tacked on the third of his three field goals — a 37-yarder — before Jaxson Dart capped a 12-play, 91-yard drive with a 10-yard touchdown pass to Gary Bryant Jr. four minutes into the fourth quarter.

The score put the Trojans up 31-28, their first lead since going up 3-0 on the game’s opening drive.

Calen Bullock intercepted Hall on a deep pass into the end zone to end BYU’s subsequent possession, but the Trojans then went three-and-out and punted the ball back to BYU for what would become the game-winning drive.

The longest gain of the drive came when Allgeier fumbled after an 8-yard gain to midfield, but Cougars tight end Dallin Holker recovered the carom and ran for another 22 yards. Four snaps later, Jackson McChesney rushed 7 yards to put the Cougars back on top.

USC moved into Cougars territory quickly on the next drive, which included a 14-yard Dart scramble. But on fourth-and-6 at the BYU 15-yard line, Kaleb Hayes swarmed to Bryant at the 10-yard line to deny USC the first down by a yard and end the game.

Hall finished 20 of 32 for 276 yards and was intercepted twice to go with the two touchdowns. Dart went 23 of 35 for 248 yards and a score. Bryant led USC with five receptions for 56 yards.

With the win, BYU reached double-digit victories in consecutive seasons for the first time since doing it four straight times from 2006 through 2009. The Cougars also completed a 5-0 season against Pac-12 opponents.

In this article:featured, ncaaf, Pac-12