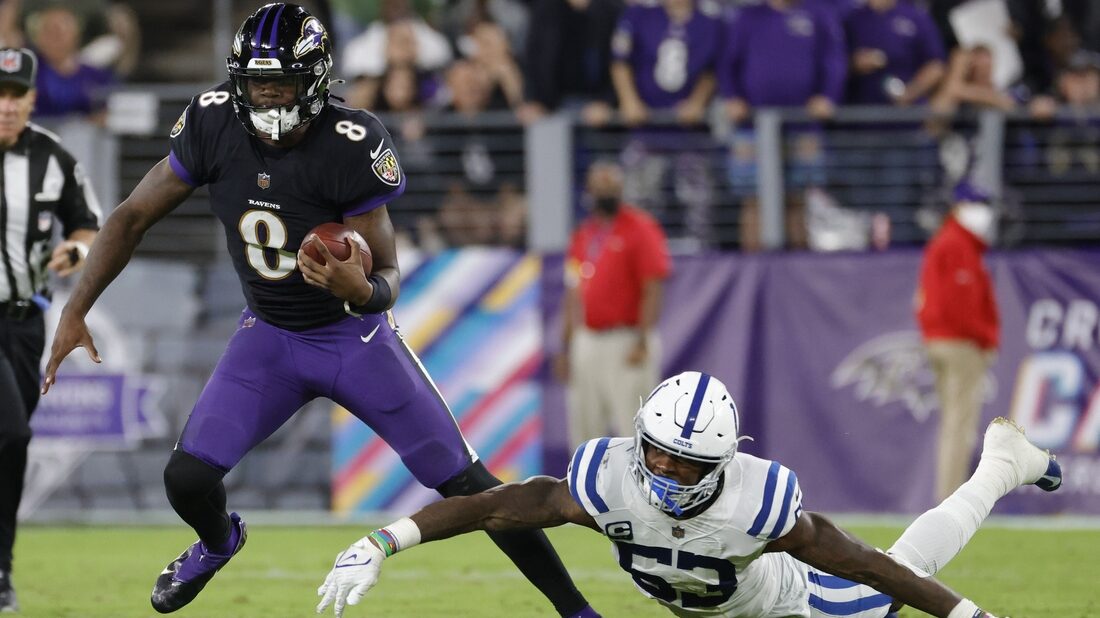 After five games, the Los Angeles Chargers (4-1) are the unlikely leaders of the AFC West, with the preseason favorites Kansas City Chiefs looking up at the Bolts in the standings at 2-3.

The Chargers will try to keep the team’s mojo going on the road against the Baltimore Ravens on Sunday. The last time the two teams met was in the wild-card round of the 2018 playoffs, a 23-17 win for Los Angeles at Baltimore, the last time the Chargers have been in the postseason.

L.A’s defense finished with a postseason team-record-tying seven sacks in that win over the Ravens. Sunday will mark the 13th time the two teams have met in the regular season, with the Ravens holding a 7-5 edge in the series.

The Bolts are clicking on all cylinders offensively, riding the rocket arm of second-year pro Justin Herbert. The University of Oregon product posted a career-high 398 passing yards and four touchdowns in an impressive, come-from-behind 47-42 win at SoFi Stadium last week against the visiting Cleveland Browns.

Herbert is fourth in the NFL in passing yards (1,576), tied for third in passing touchdowns (13) and has thrown just three interceptions in five games. Herbert’s top playmaker has been Austin Ekeler, who is #6 in the NFL in yards from scrimmage (543) and tops the league with seven touchdowns along with Tennessee’s Derrick Henry.

The Chargers are 3-1 in one-possession games so far this season. They were 5-7 in one-score games a year ago in 2020 and lost 16 games by eight points or fewer in 2019-20, leading to the offseason departure of former head coach Anthony Lynn.

“It shows us that we have belief to win any type of game,” new Chargers head coach Brandon Staley said about his team’s success in close games. “Any type of way teams want to play, we feel like we can play any style.”

Herbert and the rest of L.A.’s potent offense will have its hands full against what is normally one of the top defenses in the NFL in Baltimore.

The Ravens (4-1) are holding opponents to 23.4 points per contest, with wins this season over AFC West opponents Kansas City and Denver.

The only loss this season for Baltimore was a season-opening setback on the road in overtime against the Las Vegas Raiders.

Offensively, do-everything quarterback Lamar Jackson guided Baltimore to a 19-point comeback win over the Indianapolis Colts this past Monday. Jackson finished with a career-high 442 passing yards and four touchdowns, completing 37 of 43 attempts and earning AFC Offensive Player of the Week honors for his effort.

“It’s always about the next play in front of us,” Ravens defensive lineman Calais Campbell said about his team’s comeback win. “And we believe. When you create that kind of confidence, that kind of belief, it really builds that character you need to have a chance at the end of the year.”

Jackson leads the Ravens in rushing (341 rushing yards and two touchdowns). He has also thrown for 1,519 passing yards and eight touchdown passes.

The former league MVP ranks fifth in the league in passing yards and eighth in rushing.

“We have great defensive line coaches and edge coaches that are definitely going to work on a great game plan to be able to contain him — try to contain him as best we can,” Chargers cornerback Chris Harris Jr. said this week about stopping Jackson. “We had a great rush plan with [Chiefs QB Patrick] Mahomes [previously], and that helped us out. Hopefully, we can draw up another one with Lamar.”

On the injury front, receiver Sammy Watkins did not practice on Wednesday. Watkins left in the first half of Monday’s game due to a thigh injury and did not return. Also not practicing for the Ravens on Wednesday were tackle Ronnie Stanley (ankle) and linebacker Pernell McPhee (rest).

The Ravens placed guard Ben Cleveland on injured reserve, so he will miss at least three games. Cleveland was carted off the field Monday night with a knee injury.