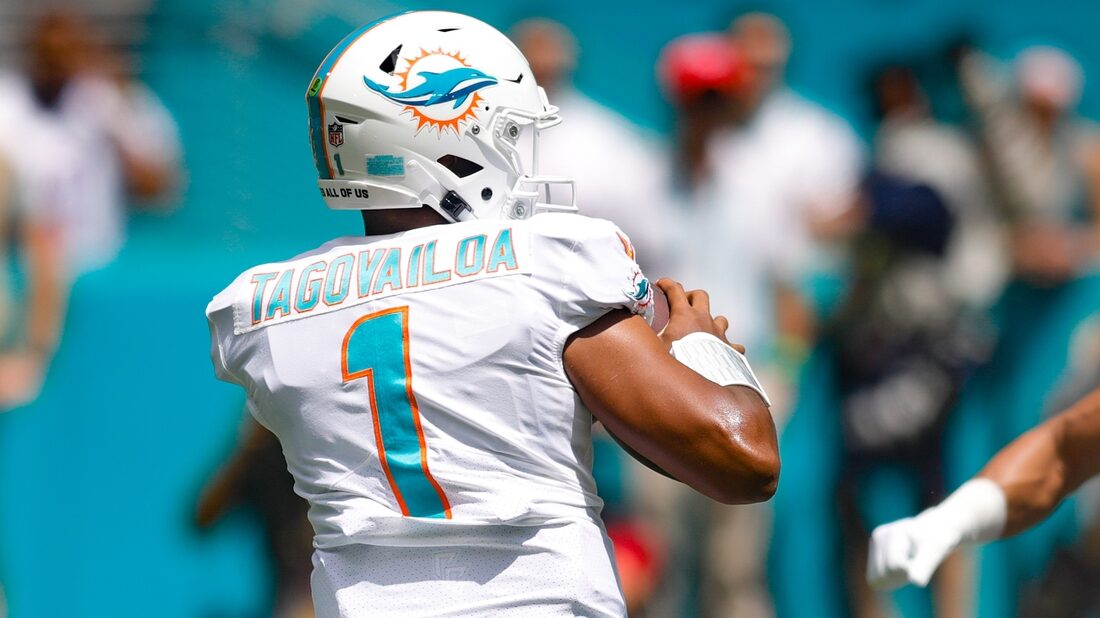 Quarterback Tua Tagovailoa, who has been out for three weeks with fractured ribs, is on track to return on Sunday when his Miami Dolphins play the Jacksonville Jaguars in London.

“We’re excited to have him back,” Dolphins coach Brian Flores said of Tagovailoa, who practiced on Wednesday. “We’re moving in the right direction. He will have the opportunity to practice and hopefully play in (Sunday’s) game.”

Dolphins backup quarterback Jacoby Brissett, who went 0-3 while Tagovailoa was out, practiced on a limited basis Wednesday due to a nagging hamstring injury.

The Dolphins (1-4) have not won a game since Tagovailoa threw for 202 yards in a season-opening 17-16 victory over the New England Patriots.

On Sunday, the Dolphins will challenge the 0-5 Jaguars, who are the AFC’s only winless team.

The Jaguars have lost 20 consecutive games, which is the second-longest skid in NFL history.

Jacksonville, which lost to Miami 31-13 last year, is within reach of the NFL record for consecutive losses: 26, set by the 1976-1977 Tampa Bay Buccaneers.

“I can’t really wrap my head around that,” Jaguars running back James Robinson said of Jacksonville’s streak. “We’ve got to find a way to win.”

“We don’t talk about the streak,” Lawrence said. “I don’t think it’s good to talk about that. You can’t get desperate. You have to continue to work.”

Lawrence, who led the Clemson Tigers past Tagovailoa’s Alabama Crimson Tide in the 2018 national championship game, has not found early success in the NFL. Lawrence is completing 59.4 percent of his passes for six touchdowns and with eight interceptions. He is averaging 229.2 yards per game.

Sunday’s game figures to be close, as the Dolphins are listed as 3 1/2-point favorites.

The Dolphins on offense are led by three solid targets in wide receivers DeVante Parker and rookie Jaylen Waddle and tight end Mike Gesicki. However, Parker is questionable due to shoulder and hamstring injuries.

In 12 career NFL games (11 starts), Tagovailoa is 7-4 while completing 63.2 percent of his passes for 12 touchdowns with six interceptions.

Miami’s running game has been poor as Myles Gaskin leads the team this year with just 167 yards.

Defensively, the Dolphins may have a concern at cornerback with Xavien Howard questionable due to shoulder and groin injuries. Howard has twice led the NFL in interceptions.

The Jaguars are much more potent than Miami while running the ball. Robinson has rushed for 387 yards, four touchdowns and a 5.8 average per carry. He is coming off a career-high 149-yard effort against the Tennessee Titans this past Sunday.

After totaling just 16 carries in his first two games this season, Robinson is now on pace for a 1,316-yard season. Last year, Robinson set an NFL record for most scrimmage yards by an undrafted rookie with 1,414.

Lawrence has also proven dangerous on the ground with 110 rushing yards and two touchdowns.

In the passing game, Laviska Shenault Jr. and Marvin Jones are the top two targets for Jacksonville. But Jones, who had a career-high 76 receptions last year with the Detroit Lions, did not practice on Wednesday due to personal reasons.

Defensively for the Jaguars, linebacker Myles Jack is questionable due to a back injury. He leads the team with 36 tackles.