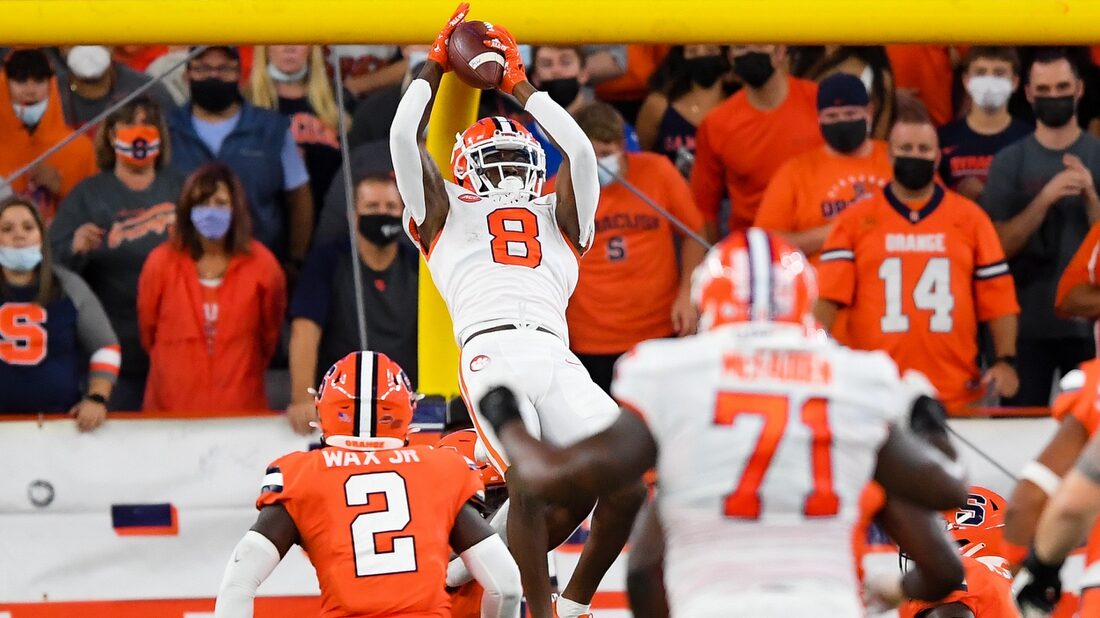 Syracuse’s Andre Szmyt missed a 48-yard field goal with 38 seconds left as Clemson held on for a 17-14 victory over host Syracuse on Friday night.

It was fifth game this season decided by a touchdown or less for Clemson (4-2, 3-1 Atlantic Coast Conference), the six-time defending league champion.

The Tigers have won eight of their past nine meetings with Syracuse (3-4, 0-3), which lost its third consecutive game, all by three points.

Clemson quarterback DJ Uiagalelei completed a season-high 21 passes on 34 attempts for 181 yards and a touchdown. However, the Tigers once again had to rely on their defense, which entered the night ranked second in the nation in opponents’ scoring and remained there at 12.5 points per game.

Syracuse running back Sean Tucker, who has rushed for 100 yards or more in six of seven games this season, had 132 yards by halftime Friday. He was held to only 25 in the second half.

The game was close throughout. Clemson broke a scoreless tie by driving 87 yards in 13 plays early in the second quarter for a 19-yard touchdown reception by Joseph Ngata in the far right edge of the end zone.

Syracuse responded on its ensuring possession, driving 91 yards for a tying touchdown. Tucker set the Orange up with a 39-yard run to the Clemson 2-yard line, and quarterback Garrett Shrader dashed untouched around the left side on the next play, knotting the game with 5:33 left in the first half.

Clemson came back to grab a 14-7 lead with nine seconds remaining in the half, driving 58 yards in 13 plays in just 1:57. The Tigers converted a fourth-and-5 on the drive when punter Will Spiers — who played quarterback in high school — lofted a 17-yard pass to tight end Davis Allen for the first down.

Justyn Ross then snagged a 15-yard pass to set the Tigers up at the 2, and running back Kobe Pace bulled in on the next play. Pace led Clemson with 76 yards on 14 carries.

After a scoreless third quarter, Clemson extended its lead to 17-7 with a 40-yard field goal by B.T. Potter with 9:22 left in the game. Syracuse struck back quickly, getting a 62-yard touchdown pass from Shrader to Trebor Pena on its next possession to pull within 17-14 with 7:18 left.

Syracuse then drove from its own 7-yard line to the Clemson 30 where Szmyt, who earlier in the game became the school’s all-time leading scorer, came up short with 38 seconds remaining.

Shrader completed 17 of 37 passes for 191 yards with one touchdown and one interception.