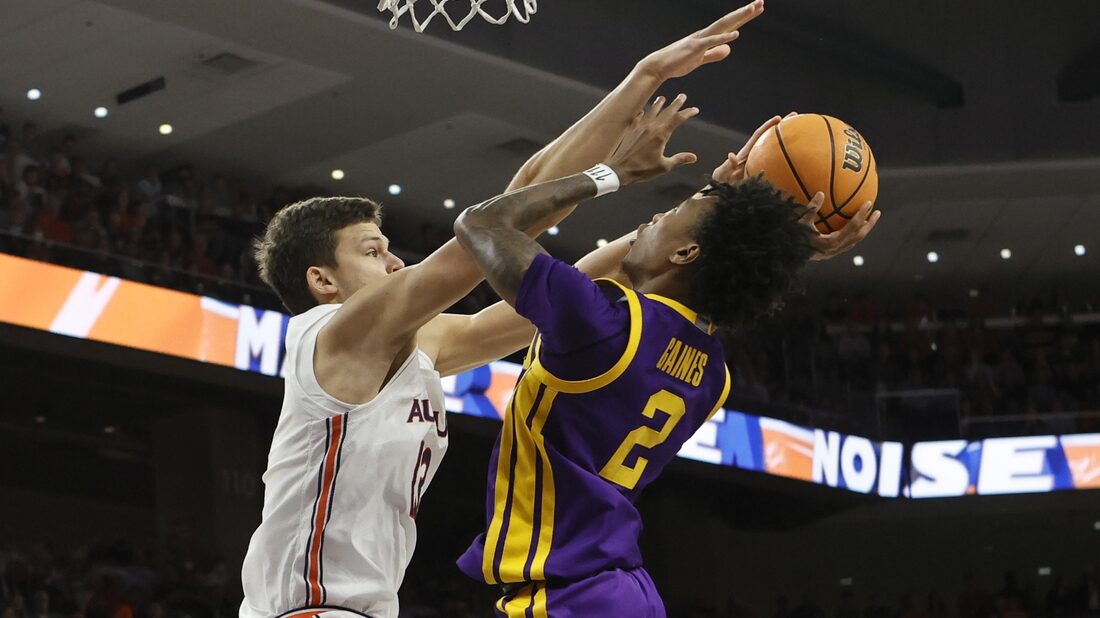 An ice-cold shooting start resulted in the first blemish of the season for #16 LSU.

Visiting LSU missed its first 16 shots from the floor against #11 Auburn on Wednesday and could not overcome the deficit in a 70-55 loss. Auburn jumped out to an 18-1 lead and wasn’t threatened thereafter.

LSU (12-1) had been the last remaining undefeated team in the Southeastern Conference and one of just five unbeaten teams in the nation.

While LSU could not buy a basket at the other end, Jabari Smith and Walker Kessler led Auburn (12-1) in scoring with 16 points apiece. Xavier Pinson scored 13 points to lead LSU, but he hit just 3 of 11 shots from the floor and committed six turnovers before fouling out.

LSU’s only point in the first 10 minutes of the game was an Eric Gaines free throw, and Auburn scored the next 18 points off the back of the parade of missed LSU shots. It would not be until the 9:14 mark of the first half when LSu finally hit its first shot from the floor on a Tari Eason layup.

LSU, which trailed 32-21 at halftime, pulled within 50-44 with 6:22 to go in the game, but Auburn stemmed the comeback attempt. The home team took advantage of back-to-back LSU turnovers and scored the next five points to extend the lead back out to double digits.

Turnovers were a theme of the game for both teams. LSU gave the ball away 17 times, and Auburn had 21 turnovers. Fouls were also a big part of the story, with the two teams combining for 41 fouls that led to 46 free throw attempts.

In this article:auburn, LSU, ncaab